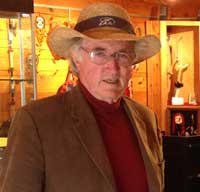 Finn Dooley is a descendent of Irish immigrants who in the 1850's claimed their  first homesteads near Rochester and Faribault, Minnesota.  The Great Potatoe Famine evicted his family from Ireland. His grandparents were North Dakota homesteaders who claimed portions of Assiniboine and Sisseton lands in McHenry and Benson counties. His mother was a reading teacher. His father was Assistant Superintendent of Public Instruction and befre that a coach, science teacher, and school superintendent on the ethnically cleansed Great Sioux Reservation.

Work in the Oil Industry

Finn’s interest in the oil industry began when he was a third-grader. In the 1950s, he lived in Belfield, North Dakota, home of the world’s most capable oilfield drillers. He watched some of the Williston Basin’s first oil wells being drilled near Fryburg. In 1968, while he awaited the Vietnam Era Draft, he worked on two high gas pressure wells south of Gillette, WY. One of those blew out. The other’s evaporation pit overflowed during a thunderstorm pouring salt and chemicals into the adjoining creek. He knows the risks of careless oilfield operations and the damages which salt, chemicals and oil inflict on surface owners' productive land.

He understands the danger of untrained or careless humans handling dangerous chemicals. His life experiences exposed him to the hazards of extractive industries. Often both man and beast, and of course land and water, are injured and sometimes destroyed by mining for rock or oil. For example, while working 4700 feet under the earth in a hard rock mining operation known as South Dakota’s Homestake Gold Mine, he began the first of many work place rescue endeavors. He picked up a dead companion whose head was crushed in a train accident deep in the earth. His dead companion was highly regarded gold miner who knew the risks of the place but momentarily forgot what he was doing. He has witnessed similar serious injury or death events, some of them involving chemical spills not only in Wyoming but also in Louisiana and North Dakota oilfield drilling operations. In his 30 year law practice, he has served hundreds of workers and their survivors who have been severely injured or suffered wrongful death in the workplace. Work place safety practices in the oil field have changed the oil patch. State and federal regulators are on alert. The same kind of concern does not yet exist  for protection of land and water.

Finn's  work on oil drilling operations in the Louisiana swamps and offshore showed him the worst and best of the Ameican oil industry. The most decrepit of the oil rigs he worked on pumped its effluents directly into the bayous.

How did you move from working in the oil industry to your law career?

With a spirit of adventure funded by well-paid jobs in extractive industries such as mining and oil he explored the remotes of North America. Motivated by the international character of the Crozier fathers, he studied the lives of the people of Southeast Asia. His law school funded his first significant trip abroad to Ghana, Nigeria and the Ivory Coast. Medical missionaries welcomed him to Guatemala and Honduras. The International Institute of Christian Scholars took note of his work in mines, steel mills, smelting operations and the oil patch and invited him to teach health and environmental law the most polluted city in Kazakhstan.

His practice was predominately machinery accidents, heavy and highway construction. In collaboration with the ACLU, he won a North Dakota Constitutional case, Cardiff v. BIsmarck Pubic Schoo District, 263 N.W.2d 105 (N.D. 1978), which requires text books be provided school children free of charge. As attorney for the United Plainsmen he drafted the pleadings and wrote the briefs that led to the victory that established that, in North Dakota, water is Public Trust property. (More on this below.)

He often was in contest with the N.D. Workers Compensation Bureau. His first chemical exposure cases involved oilfield drilling fluids. During his service as a member of the American Bar Association Environmental Committee and during his travels Finn has studied the oil industry. He has focused on Third World countries, South America, Nigeria and Kazakhstan. He concludes North Dakota should learn from Third World nations. The oil industry consistently creates a gold rush atmosphere. Local enforcement staff are overwhelmed and underfunded. One of the euphemisms of governance is a cynical statement that agencies are created to regulate. They fail because they are captured.It is expressed bluntly as The Rule of Capture. Frequently elected and appointed officials breach their duties, sometimes negligently, other times corruptly. American oil-producing states share a similar legacy. The oil industry leaves behind salt and chemically damaged land and corrupted waters.

Education, Adventure, Employments in and Out Of the Legal Profession

Finn studied faith and morals with two different Catholic Orders the first, the Crozier Fathers are now 813 years old and the second, the Columban Fathers are now 97 years old. He received his bachelor science degree in Botany and Chemistry from North Dakota State University (1968). He has served the United States Department of Agriculture in two internships one involving range land management and the other involving wheat breeding. He taught science and coached track while he waited the Vietnam Era Draft. He is an honorably discharged United States Army veteran was a paratrooper and Syrian-Arabic linguist.

Upon his discharge he earned his JD degree from University of North Dakota (1975) and his M. Ed. from Lesley University (2005).

He began his solo law practice in Bismarck North Dakota 1976.

He studied property and environmental law under Robert E. Beck, one of the world’s preeminent water lawyers and author of a three volume treatise called "Waters and Water Law." With Prof. Beck’s guidance, Finn designed and briefed North Dakota’s leading case on the Public Trust Doctrine, United Plainsmen v. N. D. Water Conservation Comm’n 247 N. W. 2d 457 (N.D. 1976 ). To this day, the case is cited in every treatise on water law as a “gap filler.” In 2005, the North Dakota Water Commission finally agreed with the unanimous court and issued North Dakota’s Sovereign Lands ______ which protects citizens’ trust property, that is, both water, lands, lakes, and rivers. A series of North Dakota Atty. Gen. Opinions have advanced the scope of the Public Trust Doctrine and clearly declare that the Public Trust Doctrine likely applies to historic and cultural sites.

Preservation of Wetlands and Historic Sites

As a citizen activist, he undertook two proceedings which prompted the United States Army Corps of Engineers to enforce Section 404 Protections of Wetlands. The first resulted in the preservation of Painted Woods, south of Washburn, North Dakota. That historic portion of the Missouri River Valley was a hunting ground of the tribes of the Missouri River Valley, a wood yard for the steamboats which served the Montana gold rush.The preserved site includes a portion of the land once occupied by an 1880s Russian Jewish Agricultural Colony.

The other section 404 endeavor required United Power Association and Community Power Association of Falkirk, North Dakota to relocate their cool ash disposal site away from windowpane sloughs. In contrast to Duke Energy in North Carolina, North Dakota’s coal companies have not dump their ashes in areas that corrupt rivers or water sheds.

Finn’s first exposures to industrial point source pollution were on the Iron Range of Minnesota. Restoration of northern Minnesota’s iron Range first mined 1860s has occurred. Often the lag time between mining and restoration has exceeded 80 years. Thinking now of salt and oilfield chemicals, North Dakota’s oil entrepreneurs began their Williston basin drilling operations in the 1950s. Unfortunately, North Dakota oil entrepreneurs made a legally unfortunate and most damaging choice. They disregarded their own professional association, the American Petroleum Institute, that had seen the damage done to Louisiana farmlands in the early 1900s. Salt dumped in pits killed plants, poisoned fish, and ruined lands. In response the API, as early as 1931, formally adopted and promulgated a warning to its membership not to dispose of produced saltwater or chemicals in unlined evaporation pits. In North Dakota the oil industry disposed of salt and chemicals in unlined pits until the late 1970s.

Who knew and when did they know it? The question brings back memories of Ronald Reagan. Although the elected and appointed state officials in North Dakota may not have known of the dangers of dumping salt and chemicals in unlined pits especially in or near watersheds the oil industry did know and ignored the risk.

In the mid-seventies, Finn began serving oilfield workers suffering chemical poisoning. He did water damage cases. His first involvement with salt contamination problems occurred two years ago after he had returned from teaching environmental and health law in Kazakhstan.

He has personally investigated salted land in Billings, Bottineau, McHenry and McKenzie counties in North Dakota. He has interviewed state and federal soil scientists and read their papers. As coordinator of the SLC he has assisted farmers and ranchers in presenting their complaints to state officials and preparing their legal cases. The coordinator role requires careful thought, action and speech because too often those who ought to be allies who have interest in land and its preservation take viewpoints which are hostile to one another.